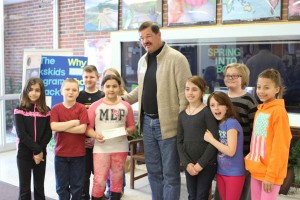 They say every penny counts, and for the students at Minot Forest Elementary, they’re counting and collecting pennies to help others in need.

Students on the MVP Team (Minot Values and Pride) helped to organize a school-wide event called “Penny Wars,” where students were encouraged to bring in spare change to raise money for a worthy cause in town.

The money will be used through Turning Point’s “Seasons of Giving” programs (Beach Bucket Brigade, Backpack to School and Kid Komfort Kits) as well as for emergency needs.

A changing of the guard at Turning Point

After working within the organization since its inception over a decade ago, Turning Point co-directors Lee MacDonald and Marcine Fernandes are stepping down for their positions.

“It’s time we moved on and left it to the younger generation,” said MacDonald at the duo’s retirement party Sunday.

Both have been involved with the organization in various capacities since it began more than 12 years ago.

Boxed lunches are now available THREE times a week! Pick ups will be made at the back of the Town Hall Tuesday through Thursday between 9:00 am and 9:30 am. Please call 508-291-3100 x. 6514 to be put on the pick-up list. Staff are available to answer any questions you may have. ... See MoreSee Less

Our office will be closed on Monday, January 2nd in observance of the holiday. We will be open normal hours for the remainder of the week. ... See MoreSee Less

Turning Point will be closed on December 26th in observance of the holiday. ... See MoreSee Less